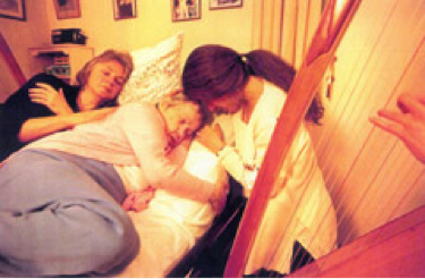 This woman had been a violinist with a major American orchestra. She responded very deeply to music at the end of her life.

This narrative continues The First Vigil.

“…What is the agent of definitive transformation? Nothing less than death. God must make room for himself in us, hollowing us out and emptying us if he is finally to penetrate us. The function of death is to provide the necessary entrance in our inmost selves. O God, grant that I may understand that it is you who are painfully parting the fibers of my being in order to penetrate the very marrow of my substance…” – Teilhard de Chardin

Deathbed Healing: Although no cure was possible, a death-bed healing occurred, interiorly. He shifted. The desperate thrashing stopped. The rattle quieted; we might have been together for as much as forty-five minutes. This man who had a history of pushing everyone away actually trusted me, rested into me, and slowly, because of the quiet singing, we began to breathe together. Although ignorant then about chronobiology, synchronization, or systems of entrainment, I knew of them unconsciously, in an inward body-wisdom, because I am musical. But I was young, and a young musician too, lacking the language of phenomenology and the physiological lexicon to describe what happened in medical terms, but I did know what happened in terms of grace. Because our two bodies were linked, heart to heart, breastbone to spine, there is no doubt in my mind now that he must have experienced the bone conduction from the singing even if it was new to him and neither of us knew the term.

In singing flesh-to-flesh, in a life-and-death situation where everything is amplified and time stops, some of his fear dissolved. Long after his heart had ceased to beat, I was allowed to hold him. The other three women on the shift that day covered for me discreetly. A palpable and luminous substance seemed to either fill the room or fill my eyes, and though admitting it in print might make me less credible to some, it might also corroborate for others what they too already know and sense. When I walked home that night, after he died, I understood his passage as a kind of birth, and what had happened to him and between us and an invisible choir of presences was something I could only call, at the time, musical-sacramental-midwifery.

So Much More Than Numbers: Death entails so much more than the cessation of brain waves or heartbeat, and, like the wind and like overtones in music, many real events and presences occur despite the fact that they are not always visible or blatantly audible to everyone or to our ordinary, distracted, pre-occupied, slightly numbed consciousness. (1) This reality is even highlighted in a part of the creed that Christians say: I believe in things seen and unseen. Since that time, I have often wondered about the dying: How many people are there who might also need a partner to hold them, either physically or emotionally? We can’t know, can we? Surely not everyone needs touch, but we are speaking about intimacy, combined with reverence and awe, and the capacity for inner stillness. Over these many years now, in witnessing those who work with the care of the dying, I can’t help but be grateful for the modern pharmaceuticals, yet sometimes the most effective medicines are the golds mined from the heart: green gold, white gold, yellow gold, rose gold. These golds cannot be measured but are nonetheless real and effective in every aspect of life.

The Mystery of Silence: The silence, too, that replaced his struggle permeated the room with a kind of living gold. The tranquility of this silence became a palpable substance, a presence, penetrating, like holy oil, as if he bequeathed something to me: a spiritual inheritance or a golden fleece. The experience with him was holy; it has gestated and anchored itself through many subsequent seasons and cycles of being. One learns that talking about delicate things of the spirit, the soul, or the body too quickly kills the reverberations. We learn that this silence bears fruit – even many years of silence! This silence becomes an aquifer in the soul, a dimension one can return to even in the midst of crowds and chaos. This is how, as a musician, I learned the importance of alternating sound with periods of silence. It is fruitful to fast from sound sometimes. I came to experience this repeatedly in the years following this first deathbed vigil and try to share with musicians the spiritual and artistic value of alternating contraction (meditative silence) and expansion (sung prayer).

Holy Rest: Additionally, since then, the single most destructive thing I can do to my own life, interior or exterior, physically or spiritually, is to ignore the need for alternating the work life with periods of living silence and solitude. It is the alternation between the two that is so fruitful; they belong together, like giving and receiving. Entering the realm of silence ensures that sound remains something creative and life giving. Looking backwards, it is clear that I owe so very much to teachers, family, and the culture in which I was raised. The cumulatively provided a basic constitutional and cultural orientation toward the contemplative dimension – it was modeled everywhere, prayer and hunger for the Logos being central in daily life. Because my teachers were so helpful and risk-oriented with me, that inward dimension translated itself into music, and the music translated itself into something far more than a career.

Endnote 1: This is underscored similarly in the phenomena of overtones; not everyone hears them but they are a physically acoustical phenomenon that can be experienced by educated listeners and are precisely measurable by technical instruments. A further phenomenon is that of color-blindness. Henry may not be able to perceive certain colors, but it does not mean that those who do perceive a fuller spectrum of colors are seeing hallucinatory data.

This text was excerpted from Transitus: A Blessed Death in the Modern World (2000 and 2005) and the forthcoming Luminous Wound series (Angelico 2022) © Therese Schroeder-Sheker, all rights reserved.

For further information on Music-Thanatology, please see Our Vigils Today: What is Prescriptive Music?